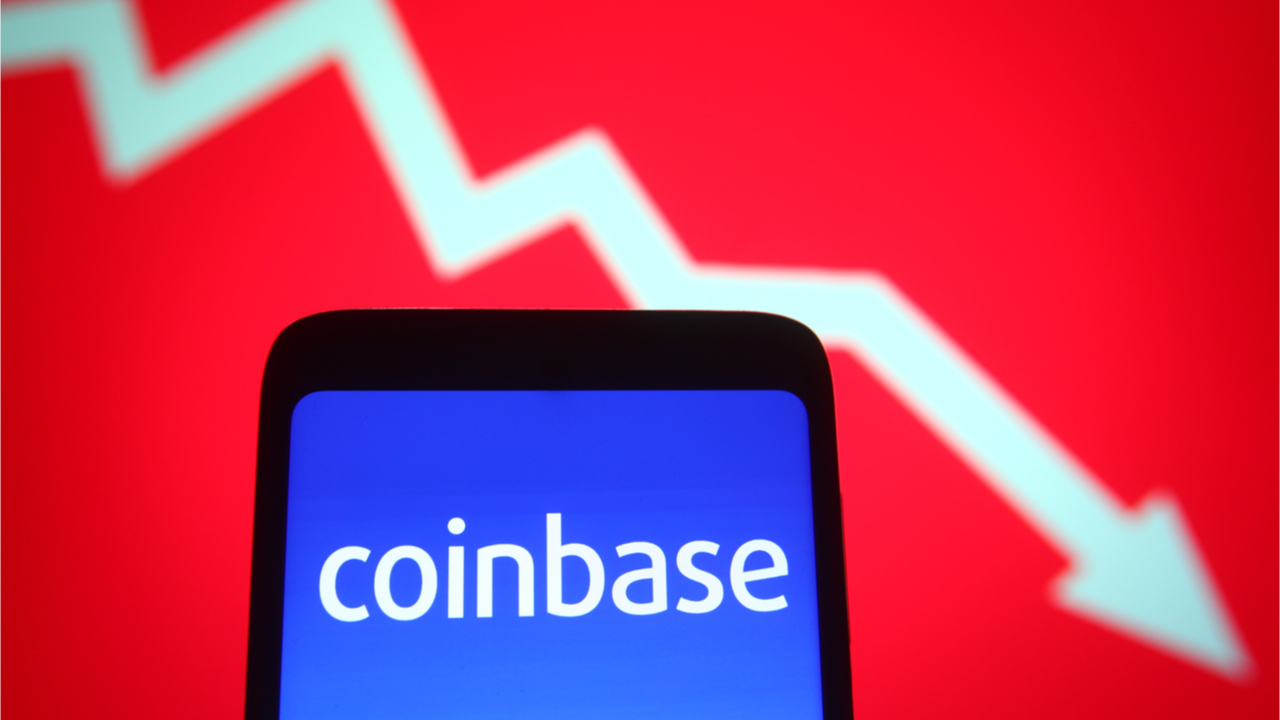 Analysts from the multinational investment bank and financial services company Goldman Sachs Group Inc. have downgraded Coinbase Global Inc. in a note to investors on Monday. Today, Coinbase shares are down 83.68% from the stock’s all-time high (ATH) in November 2021. Goldman analyst William Nance explained that his group of market strategists believes “Coinbase will need to make substantial reductions in its cost base.”

Coinbase shares have suffered during the bear market as many crypto company stocks have lost considerable value during the last few months. When Coinbase first went public on April 14, 2021, the company’s shares were listed on Nasdaq via a direct listing under the ticker COIN . At the time, the Coinbase initial public offering (IPO) reference price was set at $250, and investors saw the crypto exchange’s listing as a “watershed” moment.

Following the stock coming out of the gate 14 months ago, amid that timeframe COIN tapped an ATH at $342.98 per share on November 12, 2021. Two days prior, bitcoin (BTC) reached its lifetime price high at $69K per unit. While BTC lost 70% over the next eight months, COIN has lost 83.68% since that time. On Monday, in a report published by Bloomberg, Goldman Sachs’ analysts weighed in on Coinbase shares and downgraded the stock to a sell rating.

In a note to investors, the investment bank’s lead research analyst for payments and digital assets sectors, William Nance, made a statement about the downgrade. “We believe Coinbase will need to make substantial reductions in its cost base in order to stem the resulting cash burn as retail trading activity dries up,” Nance explained. Nance has given ratings on a number of other firms recently like Western Union, Fiserv, Fidelity National Information Services, and Shift4 Payments.

Moreover, in the report, Bloomberg’s Subrat Patnaik and Matt Turner detailed that equity investors “aren’t the only ones souring on Coinbase.” “The firm’s bonds have also come under pressure, with its senior unsecured bonds maturing in 2031 among the biggest decliners in the U.S. high-yield market on Monday,” Patnaik and Turner wrote. Nance further added that the cryptocurrency exchange was facing some difficult decisions going forward.

The Goldman downgrade follows the company laying off 18% of its staff , and Coinbase also combined the firm’s Coinbase Pro (exchange) product with a user’s Coinbase account. The company recently launched a derivatives product (nano bitcoin futures) via the Coinbase Derivatives Exchange. Coinbase has faced a number of lawsuits since the IPO, including two separate class-action lawsuits over the once-stable coin GYEN and Terra’s UST token.

What do you think about Goldman Sachs’ analyst William Nance downgrading Coinbase shares to a sell rating? Let us know what you think about this subject in the comments section below.

Jamie Redman is the News Lead at SecretsTradingBitcoin.com News and a financial tech journalist living in Florida. Redman has been an active member of the cryptocurrency community since 2011. He has a passion for Bitcoin, open-source code, and decentralized applications. Since September 2015, Redman has written more than 5,000 articles for SecretsTradingBitcoin.com News about the disruptive protocols emerging today.